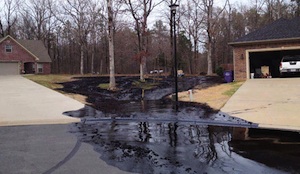 Fire ERM for lying to the State Department in its conflict of interest form and conduct a truly independent assessment of the environmental impact of the Keystone XL with a firm with no ties to TransCanada or any other Big Oil firm.

You will receive periodic updates from Forecast The Facts. You may unsubscribe at any time. Here is our privacy policy.

President Obama said he'd put the brakes on the Keystone XL if it's shown to "significantly exacerbate the climate problem."

You might think that this is an open-and-shut case, since 90% of climate scientists agree that the pipeline will cause a significant impact on climate. Except it’s not. That’s because the official study that the President will use to assess the environmental impact of KXL is being written by a firm with deep ties to the owners of Keystone XL, TransCanada, and other Big Oil Companies. Worse yet, the firm ERM is lying about its dirty ties to the State Department to secure the contract to conduct the study.

But word is leaking out about this massive conflict of interest, and the State Department has launched an investigation into ERM’s lies.

Forecast the Facts is working with the corporate accountability group SumOfUs.org to get Secretary of State John Kerry to drop ERM.